During the MIF Fair in December, the organization will present their own unique limited edition of the Somalian Silver and Golden Elephant. Manufactured in association with a coinhouse, 30 MIF Golden Elephants will be released and 800 MIF Silver Elephants. Visitors en exhibitioners will be to obtain one coin per person. They will be sold at the African Wildlife stand.

Silver Elephant Series
Each year since 1999, collectors anticipate the release of a new Silver Elephant coin. Some of the most intriguing Silver bullion coins on the market, these African Wildlife series coins celebrate the beauty and majesty of the largest animal of the African plains. Elephants are depicted in family groups or isolated before lush landscapes, towering mountains and sunsets. Brilliant uncirculated Silver Elephant coins are available in 1 troy oz or 1 kilo .999 purity fine Silver in a variety of packaging options. The series is also available in Gold.

But despite their imagery, these coins are produced by the Das Bayerisches Hauptmünzamt Mint, or Bavarian State Mint, in Germany. This has undoubtedly contributed to the coin’s popularity as the Bavarian State Mint is known worldwide for exceptional quality control. Minting coins since 1158, it is the oldest company in Munich. 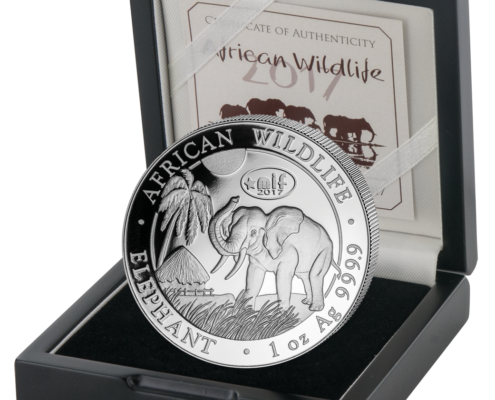 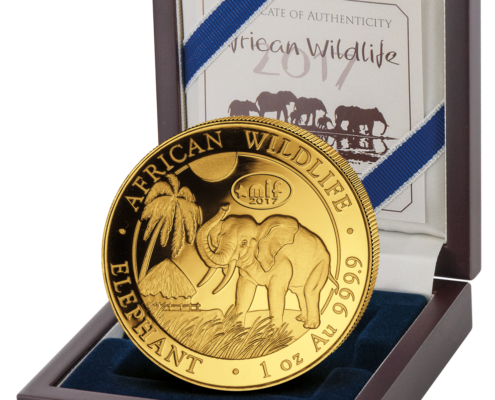 Silver Elephant coin’s controversial history
Between 1999 and 2003, African Wildlife series coins included the legend of Zambia, a landlocked country in Southern Africa. In 2004, however, the Bavarian State Mint transferred the series’ legend to the Somali Republic, a coastal nation on the Horn of Africa.Some experts, however, have cast doubt on whether authorization from the Somalian government is sufficiently documented by the Bavarian State Mint.

There is no evidence to suggest that Somalia has ever recognized Gold or Silver Elephant coins as legal tender. Coins in the African Wildlife series are not distributed by the Central Bank of Somalia. Any actual connection between the coins and Somalia is unclear due to political turmoil, ongoing civil war and battling factions throughout the country.

Somalia remains in the process of building a federal parliamentary republic. Despite tensions in Somalia, the African Wildlife series showcases the country’s beautiful landscape and living resources.

History of The Israeli Shekel
Scroll to top